With a heart full of jazz history and a nose for young talent, the BIMHUIS has stood for excellent, adventurous music for more than 45 years. 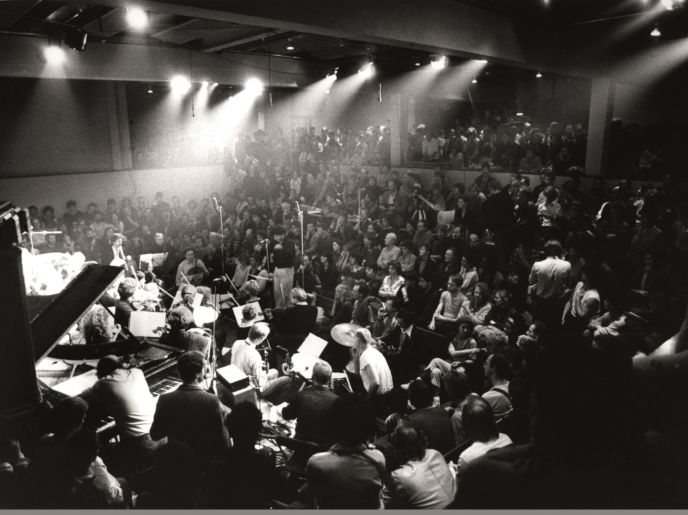 In 1974 saxophonist Hans Dulfer, wind player Willem Breuker and pianist Misha Mengelberg were looking for a place to give Dutch jazz its own stage. They found an old furniture store on Oudeschans, stripped the walls into bare concrete, assembled a provisional stage and opened the first BIMHUIS in October ’74. The start time was one of enthusiastic, progressive initiatives in jazz. Completely in keeping with the spirit of the times, the traditional approach was strongly kicked out. It was a place for and by musicians, where you heard the latest sounds and where musicians were paid fairly.

Soon the BIMHUIS became one of the most important Dutch stages for improvised music. Band leaders from all over the world such as Charles Mingus, Archie Shepp, Cecil Taylor, Pharoah Sanders and Sun Ra went to Amsterdam to feel the atmosphere at the Oudeschans. In addition to big names, there was still room in the BIMHUIS for new Dutch initiatives, conservatory students and meetings between musicians of all generations. An attitude that still stands today.

In 1984 a major renovation took place and the room was designed as an amphitheater. This meant that you could almost sit on the lap of the band of the evening, but at the same time easily get a beer at the bar. That too has not changed in the current BIMHUIS. A professional recording system was installed, and many performances were released on record and CD or broadcast on the radio. In the 1980s and 1990s, the celestial stormers from the early period grew into internationally respected orchestra leaders.

In 2005 the current BIMHUIS opened its doors on the Piet Heinkade. Nowadays BIMHUIS houses an intimate room, an excellent café and one of the best views of Amsterdam. Concerts are live streamed and can be watched back 24/7 at BIMHUIS Radio & TV. The liberal jazz blood has remained: in the BIMHUIS, rules are still being broken, holy houses kicked down and so-called boundaries crossed.

The BIMHUIS is a place for groundbreaking musicians of all generations, for a curious audience with open ears. A node in the international network of adventurous music.

Do you have a warm heart for BIMHUIS? Then become a Friend or see how you can contribute in a different way.

The BIMHUIS is a member and co-founder of the Europe Jazz Network. The Municipality of Amsterdam supports the BIMHUIS with a multi-year subsidy within the framework of the Amsterdam Arts Plan 2017-2020. The BIMHUIS program is made possible in part by the Performing Arts Fund. The BIMHUIS thanks the Prins Bernhard Cultuurfonds and Sena for their support. The BIMHUIS is sponsored by Grolsch.